It was while watching the Bio-pic - Mister Turner that I got to thinking about a studio. I am fascinated by artist's studios. Mainly because I would love one. Wherever I have lived or built a house during my earthly tenure, I have never ever managed to fully develop a space that I can call my own in the studio department. All of my design or art work has been done on kitchen tables or my humble desk or drawing board which is always propped up on something it shouldn't  be. Which is not how any struggling artist should have to exist.

I remember seeing a video somewhere where our mentor Mister Waller was building his own studio from which to produce his wonderful acrylics. Egged on by his delightful daughters. And I envied the bloke if I'm honest. For me a studio is much more than just a place to paint. It is a place where the things I love can be assembled to be gazed at. It is a place where one should be able to contemplate. To dream. And to pin up one's ideas for one's future masterpieces that haven't happened yet.

Back to old Turner. He was what they called a romanticist. Well I used to be one of those too. He was a sort of Georgian Brett Whitely in his day, in that he was tres avant-garde - but in the studio department, he relied on the front rooms of his mistresses. He had two in succession you see. With an overlap period. Both widows, passed by Turner's studio in peril of the old bugger dropping his brushes and jumping them on the first floor landing.

Going by the interpretations of Turner's faire l'amour méthodologie in this bio-pic, it was no easy ride. Or in the style of a real romantique. But it clearly spurred him onto greater things in his studio. Both of these land-ladies would happily grip the bannister for a few minutes, for the fiver he would press into their palms on a regular basis by way of studio rental.

Which has got nothing at all to do with my studio. I am still studio-less.  Sans atelier as it were. So I have been watching what others do. And have. The lucky beggars. There are oodles of women in America who have wonderful studios built by specialist studio builders who hold their hammers up to the sun before they start banging, so that in the studio they build, the light through the windows hits the canvas in just the right way. Then you see those who are very plainly working from their third bedroom. The small one. With a rubber plant in the corner. And then there are those who have a wonderful rustic, cave-like building at the end of the garden, which is both a retreat and an energy source.

So I've been walking around the property with my hands behind my back looking for potential locations. I built a nice summerhouse a few years back in the front garden. The windows came out of an old Victorian mansion, which was torn down by some evil developer type. As did the little French doors. But to be honest, you could only work in this for two months of the year, due to the succession of extreme cold and intense heat and if you ever attempted a big canvas, the space is just too small. It would be hanging out the front door for the whole neighbourhood to see while you worked on the other half. So the Summerhouse was quickly ruled out.

So I visited the sister. The one who lives in one the nicest parts of Australia. She has a studio built in the wide vistas of her 8 acre spread of English gardens. She even has a lake like Claude's at Giverny. And this is the sort of studio I would like. (Pictures below.) I have visions you see, of well heeled women with Hermes handbags coming in to see if I have something for their library wall. Which of course I would have. If I had a studio. 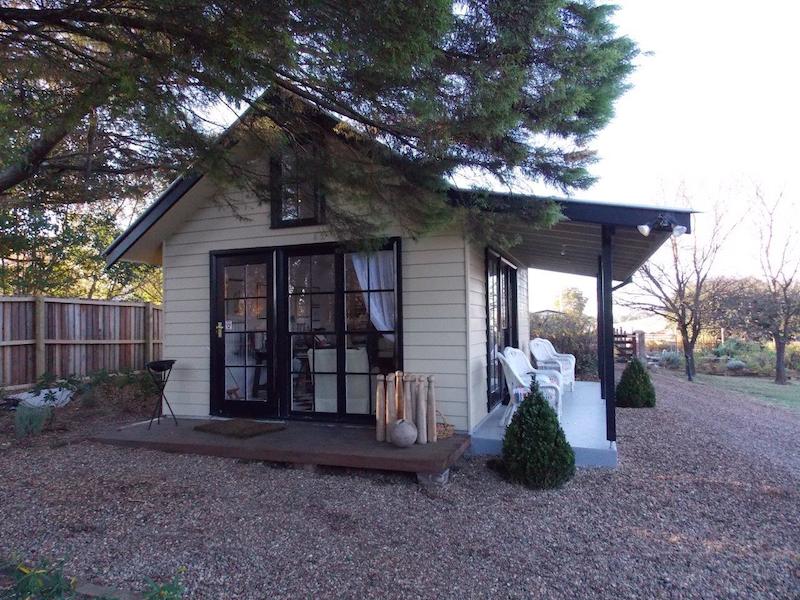 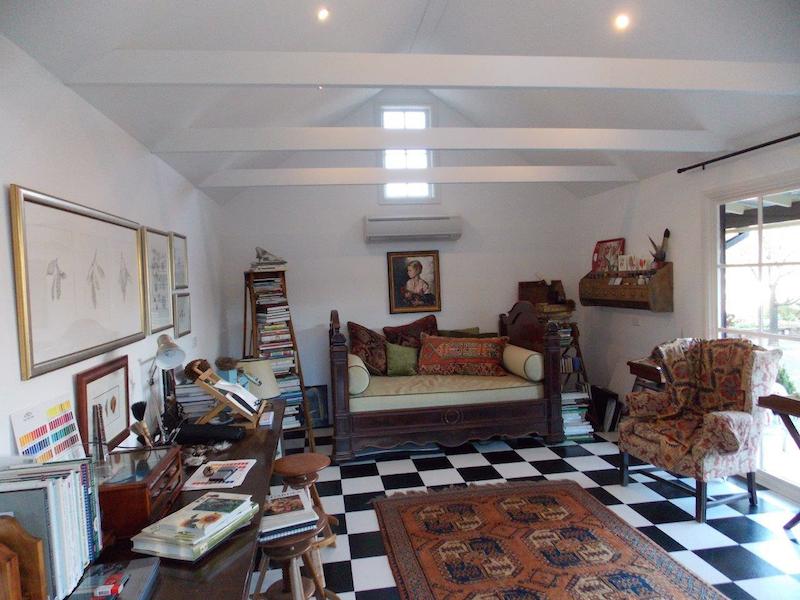 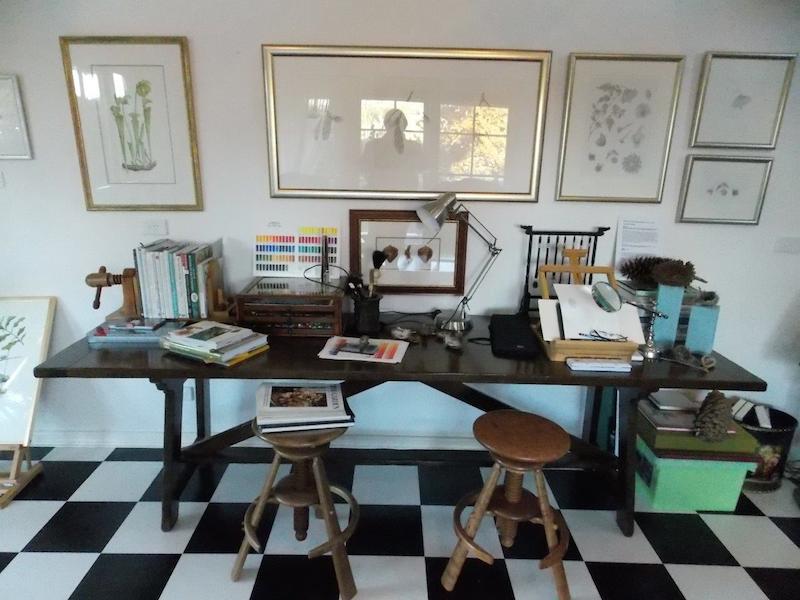 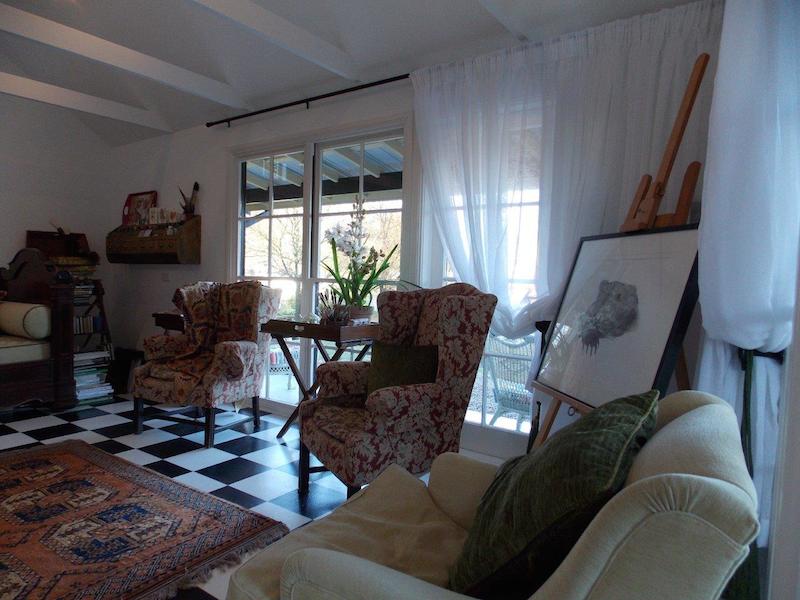 Sadly - mine will be much humbler. But just as inspirational going by the plans I have drawn up.  One thing we have here at Chateau Le Struggle, are verandas. Several of them - and one in particular that gets no real use as a veranda. And it was this that a certain person, who has better ideas than I do more often than not, pointed out, as the perfect place for a new studio.  A little odd in configuration certainly - but still 20 feet long by a good 7 or 8 feet. So I can manage an office space, studio area and little gallery in the one space. Behind the existing grape vines! Who needs Provence?

As soon as winter is over, the work will begin. I have a stack of wood in the old shed,  bundles of Canadian Cedar shingles and other hoarded matter that I knew would come in handy one day. Walls will go up, insulation will be stuffed into every crevice and the old Victorian sash window I had left over from the Summerhouse will be restored and pressed into service once again. By summer I should be laughing and be in the same league as my mate Waller and all you other lucky buggers with a studio.  As they say in real estate - watch this space.

And it would be remiss of me not to give a gentle nod to my old mentor north of the border and tell him that I am sorry he has to face this unexpected challenge at the moment. We think of him every day and hope he gets better  - forever. Real soon. Frankie needs someone to manage and we need someone to look up to. So there.