This past month my botanical freight train blasts on in a veritable flurry of plastic paint- with only a couple of complete and dare I say it - utter failures. Rather than slit my wrists and start typing a farewell letter to my shrinking world, I soldiered on. Latest tally- two sold - two in an art show - the results of which I will fill you in on in a moment.

The last two weeks I have gotten up and after a session of mental exercise (much easier on the body folks) - I have done a Monet. Which is what Monet did for most of his latter years.

"Water Lilies again Claude?" said Mrs Monet. "Mais bien sûr!"he muttered in that fine French brogue of his.  And water lilies it was - by the yard.  Mind you- it helps if you have a yard full of them. Which he did.

That said, I could have gotten up and said - "Today I'm doing a Botero". He was the chappie who loved painting fat people - much favoured today by collectors of the genre. Botero hit pay dirt when he suddenly realised the world was full of aficionados of the fuller figure.

So I approached one of the local fat ladies and having checked the joints on my studio Miner's Couch and draped it in some French toile, I put my game plan to her. "I want to paint you" I said. "I'm doing a Botero. Or a Lucien Freud" I said.  You can arrive in your dressing gown as these blokes liked their women in the raw" I added. "It gave their paintings that added risqué-ness so treasured by lovers of - what's the word? Pneumatic bliss!"

Well slap me to the ground - there I was all set up with fresh water and my tubes all squeezed out on my palette and the standard lamp glowing over the miner's couch and a note slithered under the studio door. "Can't come - I've got a boil on me bum" it read. So my attempt to mirror the great Columbian painter and cash in on the well endowed was dashed on the spot.

Which brings me rather neatly to something that happened to me in the street the other day. Despite being a poor artist- not to mention a struggling one - and reeling from a variety of disasters ranging from self loathing to complete brain fade - a woman approached me as I sipped my morning cappuccino. "Are you Dick the artist?" she enquired. "I am - until another artist called Dick comes along" I ventured.

She said rather grandly ' I wish to commission you" she said " to paint me!

"I want something large for my boudoir wall."

She'd obviously been reading a lot of French magazines and had thrown herself into the whole L'humeur de la France. As indeed, so many of them do when they move to the country.

"Further" she said "I want you to paint me -(long pause) - in the nude." Of course my mechanisms kicked in as I pondered the ramifications of this in a small country town. As I was mouthing the word "NO" - she said "I am willing to pay you $20,000."

So I said - leave it with me for a minute while I think about it. Twenty grand is not a number that most artists hear every day, so I made my mind up quickly before she changed hers, as I licked the last of the froth off the spoon. "I'll do it" I said "on one condition."

"I'll do it on the condition that I can leave me socks on, so I've got somewhere to wipe my brushes."

Now those of you who have been round the block a couple of times will know that this is a very old joke. But in the spirit of cheering up those whose lives are a series of ups and downs, like mine, I'll do anything to get a laugh these days. 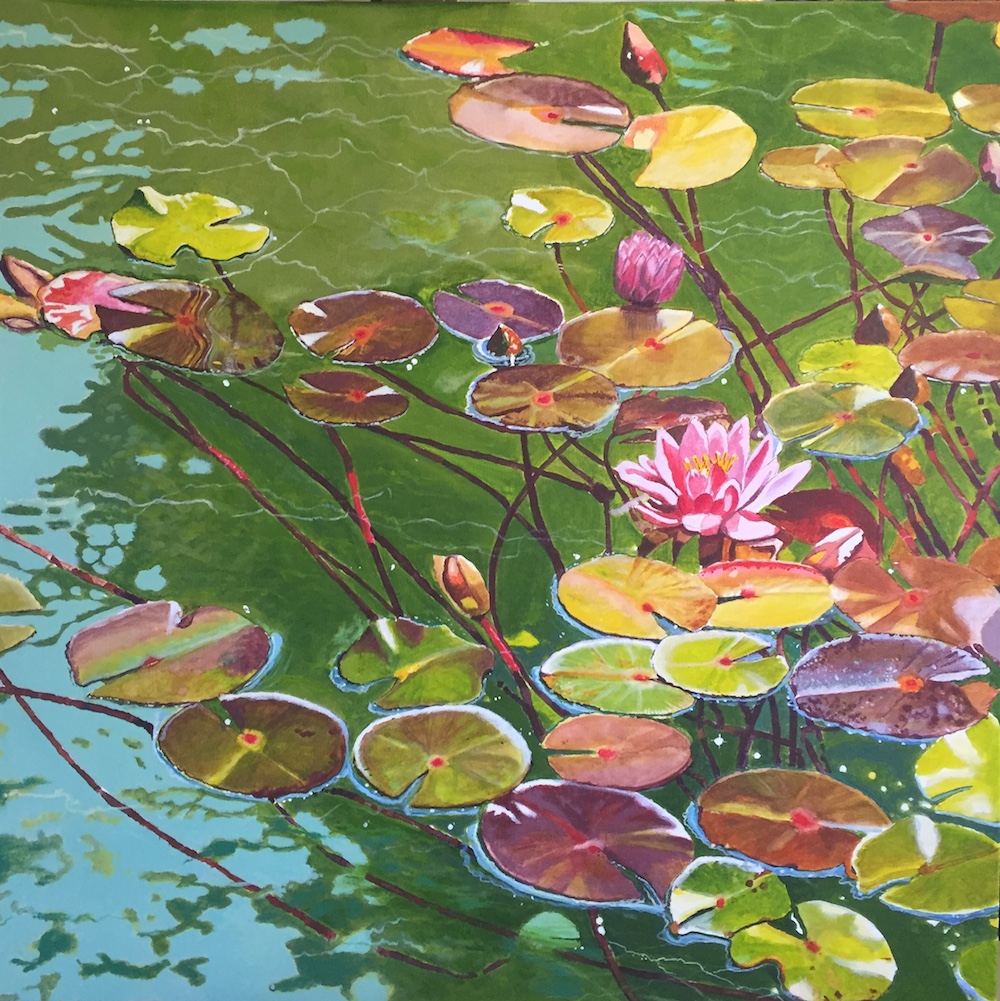 But back to the job at hand.  Another canvas of water lilies.  I now know why old Monet liked them so much.  They use just about every colour in the rainbow.  From purple to sage and lime green, from violet to all the siennas - from crimson to violent pinks for their blossoms.  Water lilies give your paint stock the most vigorous workout imaginable.  The other trouble with water lilies is - they take time and loads of it.  I went at it like a man possessed the other day.  Six straight hours, only pausing to swig from the orange juice bottle in the fridge.  And what did I achieve? Six leaves.  Or pads as they are known in the lily world.  That was it.  I was bloody disappointed to say the least.  I'm sure old Claude belted them out more efficiently than that.  I mean - Waller would have daubed out a forest of Pandanaceae  in that sort of time.

Which brings me back to that art show.  Stupidly I could have gone in another one, that same weekend in a much larger city.  They had a 'Sold' ratio somewhere near 90%! And some terrific art.  But thinking that I am still reinventing myself and my stuff is not that good just yet, I went for the small village art show in a town full of pensioners and new age people.  To my horror they had hung my art 10 feet up a wall above everyone else's.  Next to the gas heater.  You needed a ladder to see it.  So I knew in advance that I had as much chance of selling it as flying to the moon.  If you expect the worst you don't get too disappointed I suppose.  Just don't stop painting.

Despite these minor setbacks I am now working on a large canvas - the  biggest yet.  I should have this finished by the time the next issue of AA comes around.  I am now feeling super confident.  I know that you have to put the hours in.  I know you have to get those colours just right.  And I know how to blend.  And to save paint I have purchased the very thing that I wanted at a $2 shop - little stainless steel pots with lids sealed with rubber gaskets to keep those larger difficult mixes moist and workable for a few days.

I will make the transition from floral subject matter as the whole world seems to be doing these.  But I've learned a lot.  I had never painted a flower and now I have.  But I've had a few ideas beyond the fat ladies brainwave that will see me getting better by the day.  Now that's optimism for you.  I should also say thank you to those who responded in the nicest way to my last article.  No one knows of the process like another artist.  Keep your brush moist and your feet on the floor is all I can say. And a bit of encouragement doesn't hurt either.